​Over seven thousand (7000) articles have been written to date regarding the subject matter, director, cast, budget, political parties, film society, and nuances involved in creating this highly anticipated feature.

If you are interested to read some news about our movie, here are a few out of hundreds of latest news. 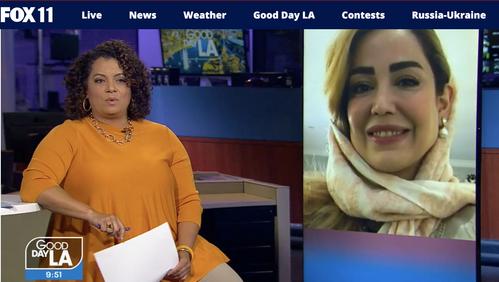 History of the project:  " Laleh " the movie, is known as "Drive" went to per-production in Tehran - Iran in 2012 and was completed in March 2021. Yes, only a few months into the shooting of the movie with almost 60 percent shooting was done, bureaucrats in the Iranian Ministry of Arts, the manager of the Experimental film center ordered a raid on the production office in the middle of the night in September of 2012 and took away all the items of our movie, including the hard drives with all the shooting footage, then they shut down the production office. Why? How could they do such an illegitimate action? After seven years of battle and fighting with a few autocratic managers inside of the Iranian Cinema Organization, the answer came up to the surface after seven years of suffering and losing time and Jeopardiesing our life.  The man who ordered the production office to be shut down and stopped the production had a personal and political problem with the subject matter of the movie, ” story of a woman achieving her dream of racing cars…!!!” They didn’t want to see women make a dynamic impact in the society of Iran.  So, they shut down the production office, destroyed every single stage of the movie, tore up the sets, and forced everyone to go home in November 2012. The only one who did not go away and fought back was the Writer-Director-Producer of the movie, Mr. Essy Niknejad. He found himself among a group of dissimulative bureaucrats and Mr. Niknejad had to work harder than ever. He spent seven years of the prime time of his life, fighting for this story that had to be told. He sacrificed his personal finances, his health, and his time to take the movie out of the dirty hands of those angry and selfish managers inside the government. There was opposition at every level from devious, authoritarian politicians in the Iranian Cinema Organization, under the leadership of Iranian President Mr. Hassan Rohani. There were countless court battles and meetings with many other Iranian officials, some of whom were sympathetic and helped Essy get the unfinished project out of the opposition’s hand. At one point he even had to take his case to the Iranian Parliament to explain that he has been the victim of narrow-minded management and dishonesty of some professional filmmakers and jealous friends. Finally, after seven years, he got permission to go back to production. And so, Mr. Niknejad finished the movie “Laleh”, with the help of an amazingly talented Iranian crew and a few friends inside the Iranian Cinema Organization.

On March 15, 2021, “Laleh” the movie had a grand premiere opening in Tehran at eight cinemas at the same time. When Iranian officials and professionals from the movie industry and critics actually got a chance to watch the finished film with general audiences, many changed their minds about their former opposition and loved the film and said, “it is a great movie...”. But the true reward for Mr. Niknejad was the impact it had to inspire and please the general audiences in Tehran.

Now The movie “Laleh” team wants to find a wider distribution for the film and bring the same inspiration of a woman pursuing her dream to audiences across the United States and throughout the world.